Some days ago it happened. As every day, I was sitting in the bus on my way to work, playing Pokemon GO. Swiping the Pokestops, looking for free slots in gyms, occasionally catching a Pokemon on the go. I was starring out of the bus window waiting for something to happen in the game, when suddenly a thought crossed my mind: Why am I still playing this?

But back to the start. Pokemon fans around the world were impatiently waiting for it, and some months ago Pokemon GO finally launched. It was every nineties kids dream: Catching the little monsters in the real world! And it was so much fun! I spent many afternoons going on walks, finding new Pokemon and capturing every gym I could find. What I enjoyed most was meeting up with friends and catching the critters together. And it was simply amazing how some Pokestops evolved into a meeting point where sometimes hundreds of players were hanging out, setting lures and sharing experiences and theories about the game.

Nobody cared about the simple game mechanics when it came to the capturing mini game. In fact I even think that it shouldn’t be more complex, as it makes the game playable for everybody, even people who don’t play games too much or small children.
I didn’t even mind that the fighting mechanics were that basic. Even though I spend most of my time breeding perfect Pokemon in the regular games. On the contrary, it was refreshing not having to think about EVs, IVs, special abilities, move inheritance and all the other complex stuff.

So I was quite happy, collecting Pokemon in my Pokedex, playing the game every day on my way to work, meeting up with friends, figuring out the spawn times at home and at the office. The first thing that started to annoy me after some weeks was that I could not hold a gym longer than some minutes, or hours at best.

Then one day a friend of mine casually showed me his critters. “I played some Pokemon GO yesterday” he said with a big grin on his face. His rooster was full of Exeggutors, Blastoises and Snorlaxes. I starred at him in disbelief, since I was level 20 while he only was level 10, and I never ever had even seen one of those Pokemon. Soon I realized that it wasn’t sheer luck or a secret farming spot in Zurich, but simply cheating. “It’s easy,” he said, “you just have to install an Android emulator on your phone, simulate the GPS coordinates of the location with rare Pokemon, and voila!”
I asked him, if you wouldn’t get banned if you jump around the globe like that. “Not really. You just have to reset your location before you throw the Pokeball and you’re fine. And even if you get banned” he said nonchalantly, “you just have to tap on a Pokestop 40 times and you’re back in the game.”
I sat there as if somebody just slapped my face. Suddenly I knew why all the gyms were full of Gyaradoses, Snorlaxes and Dragorans while I still was stuck with my army of Pidgeys and Weedles.

So cheating clearly breaks the game, but as a game developer I just can’t blame those who do cheat in Pokemon GO. Like I mentioned before, the game is perfectly fun in the early game. But it gets tedious and absolutely unrewarding in the mid and late game. You got all of the common Pokemon and their evolutions, so you end up just grinding your levels. Which not only gets harder and harder due to the exponential amount of XP you need to level up, but there also is absolutely no point in it as soon as you reach level 20. With level 20 you unlock Ultra Balls and you most likely have some decent Pokemon so you can compete in gyms. And gyms are broken anyways, since they are too easy to capture, even if you defend it with maxed out Pokemon.
GPS spoofing on the other hand keeps you busy and entertained way longer. You can hunt for your favorite Pokemon, you can hatch eggs way faster, you can explore places where you normally could not go, and all that while you’re relaxing on your couch and without the cumbersome battery drain.

Niantic surely is trying to fight cheating. But I think that there would be some not too complex measures, that would greatly decrease the temptation to cheat. Besides notorious optimizers, also called people who just want to be the best no matter what, there are people who are cheating out of pure frustration. Because the game itself is not fair: Pokemon GO spawns more Pokemon at places with more players. At first glance this might sound reasonable but since Pokemon do not despawn or get claimed as someone catches them, I can see no benefit in that mechanic. I mean seriously, why is that? Players living in less populated areas are already at a disadvantage as they will find less Pokestops. That there almost are no Pokemon outside of cities makes the game nearly unplayable in rural areas. Also wouldn’t it be fun if the game would encourage you to go to the forest or to the countryside to catch Pokemon? It would be so much more like the game we loved so much in our youth. 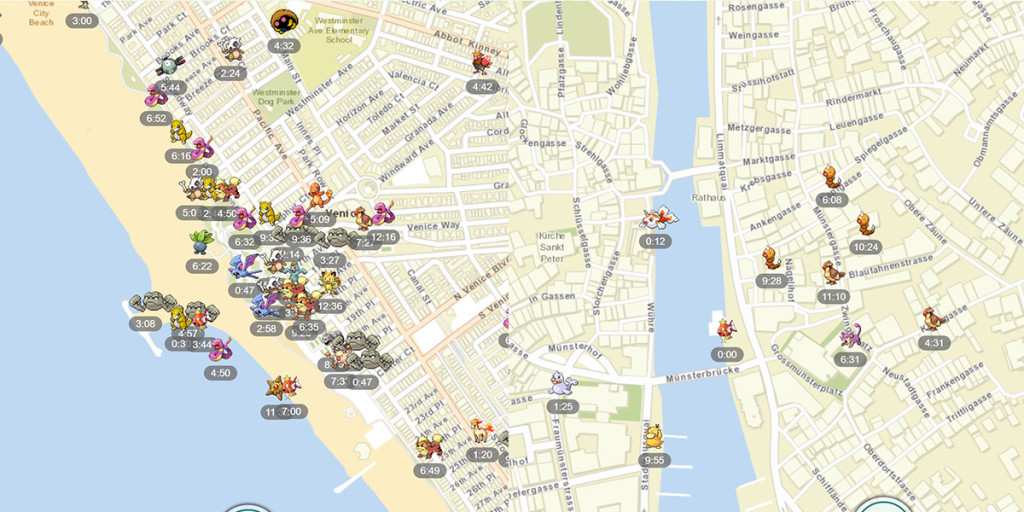 So spreading the Pokemon spawn locations and numbers even would be the easiest step to make the game more enjoyable for everyone. The next step would have to be fixing the mid and late game, which probably would take a tad more effort. So let’s start with stuff that already is in the game, but does not work properly: Gyms.
Technically, gyms are a fun thing in Pokemon GO. After all they are the only way you can do fights, a key part of the original Pokemon games. While striped down to a very simple mechanic, it still is a welcome change to chasing Pokemon and Pokestops. Sadly, the balancing of gyms renders them mostly useless. It is way too easy to capture a gym from another team. Let’s make an example: Four level 25 players band together to defend the gym. That’s quite an effort, since four people invest time and some of their strongest Pokemon to do so. But currently, it would be perfectly possible for one level 20 player to take the gym away from them without breaking a sweat. I do understand that Niantic probably wants low level players to be able to participate in gym fights. However this also diminishes the meaning and the reward of capturing a gym. I would welcome a more long-living mechanic. Whether this would be a system where you would have to visit a gym several times to make it more secure, or just making the part of capturing it more difficult, I guess there would be several approaches to that.

Now I do know that coins are tied to gyms, so there probably is some explanation for the current system in that. But is it the best idea? Like I mentioned earlier, the game is lacking mid and end game content. We know from other games that grinding currency can be a part of content generation, so why not use that too? Wouldn’t it be fun to have daily quests in Pokemon GO which would be rewarded with coins? Something like “Catch 10 water type Pokemon”, “Hatch a 5 km egg” or “Capture a gym”. Those would be features very simple to add. And in my eyes they would be so much more fun than trying to run from gym to gym to get as many coins and in the end realizing that all your gyms are already gone and you just get meager 10 coins anyway.

Adding or changing those things would help the game a great bit to be more interesting for long term players. But it probably would not be enough. So what else could be fun? What else did we love about the original games? More battles! No, I’m not talking about player versus player battles. Those are great too, but not everybody has friends to play against, and seeing how many people are quitting, those circumstances probably will not get better. But good old battles versus NPCs. Those NPCs could be placed in the world like Pokemon, you could visit and battle them to level your Pokemon. This not only would be fun, it also would make a currently very stale mechanic so much more interesting: Leveling Pokemon. Stardust, one of the currencies you need to level your Pokemon is one of the most broken things in the game in my opinion. It is so obvious that the developers only put it in the game to limit Pokemon leveling over all different Pokemon species. This move is completely ok, but like a lot of things in Pokemon GO you just could do it better, more consistently.
Candy on the other hand works way better in my eyes. While it also only tool to keep people catching the same Pokemon over and over, it makes sense to me on a narrative level that Pokemon need candy to evolve or get stronger.

So keeping candy while getting rid of stardust and replacing it with NPC battles would be my last suggestion to make the game better, apart from the already planed features. I’d even go a step further and say changes like these should be implemented before they add any other new feature, since the features Niantic has planned are all in the category “icing on the cake”. And this just does not work if the cake itself is kinda shitty. The features I suggested would not only make the game more fun for all the players, but it would also get rid of some reasons to cheat as it would greatly reduce the advantages you currently have by cheating.
I do know that my suggested ideas are neither very creative nor very unique, but in my eyes Pokemon GO does not have the aspiration to be a arty game. It should be a solid, entertaining and long-lived game, much like the original ones where.