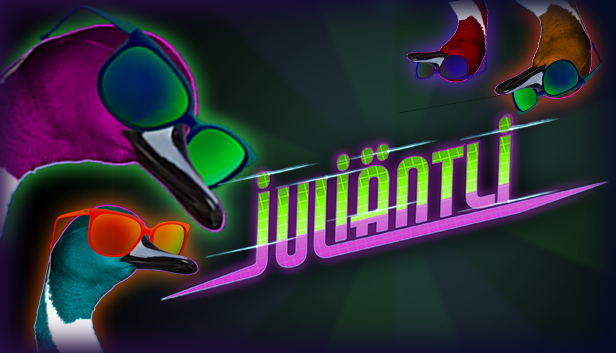 Juliäntli is a tiny, handcrafted rhythm game about ducks. You psychedelically click some ducks while they freak out over their awesome beat. It’s short, it’s crazy and a fun experience! 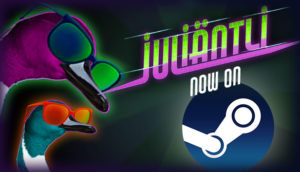 Juliäntli is a simple rhythm game where you click ducks on the beat. When you hit the ducks, they will activate their special abilities. Green ducks will give you more time to play, blue ducks attract other ducks around them and red ducks destroy ducks in the vicinity. There are also combo ducks which will give you more points and more time, but you have to hit them in the right order to not break the combo.

What is the goal in Juliäntli?

Mostly enjoying a crazy game with duck techno. But if that’s not enough, there is a global high score to beat.

How do I get the most points?

Points are calculated the following way:

Who made the awesome soundtrack for the game?

The soundtrack is composed by a good friend of mine, Michel Barengo. Have a look at his other stuff, he’s a great composer!

Why did you make Juliäntli?

Juliäntli is a birthday gift for my boyfriend. I wanted to give him something special, and since making games is the only thing I’m good at, I made him this game. Ducks are an insider joke in our relationship, so I wanted to make a game about ducks. The name of the game, Juliäntli, is a combination of his name “Julian” and the Swiss German word for duck, “Äntli”.

Why is the game not free?

Since the game is super tiny and a birthday gift, it’s totally legitimate to ask why Juliäntli is not free. I decided to sell it for 1$ for the following reasons:

We would love to let the players decide on that. Let us know what you want to see in the game! Things we think would be great are for example:

As the game is so tiny, why is it not early access?

By putting the game on Steam I wanted to make the birthday gift for my boyfriend more special than… just giving him a USB drive with the game I guess? So I would like the game to be released on his birthday.

I bought the game and was disappointed. What can I do?

We know that the game is tiny and we don’t want to rip off players. Feel free to refund, we want our players to be happy players.